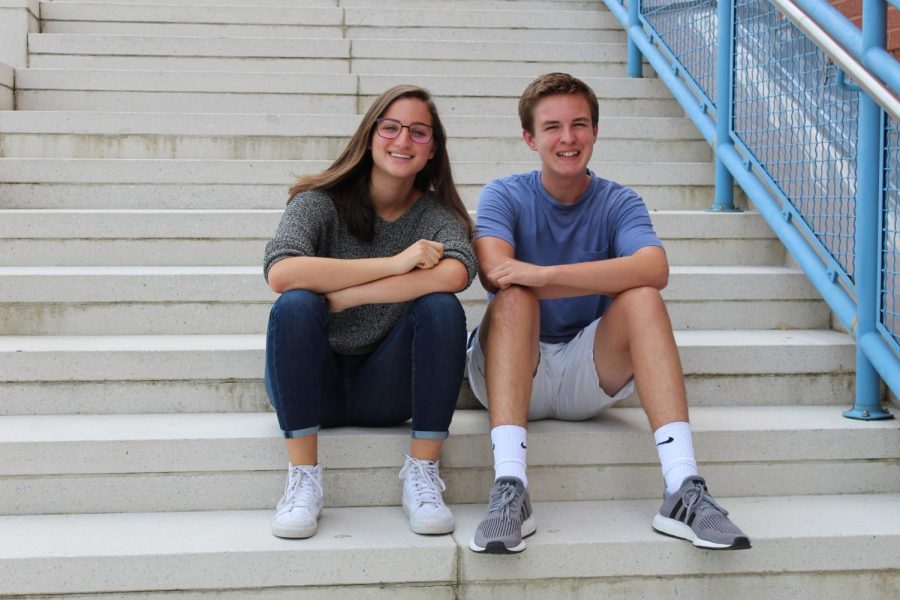 When he is not jamming out to I Got A Feeling by the Black Eyed Peas, you can find junior Connor Smith spending time with his pug Daisy. After a summer full of tubing at Lake Anna and attending baseball games, Smith has returned to school to make his debut as a reporter for The Sentry.

While he loves to write, Smith has several other passions that he has shown through his extracurriculars.

“I am a part of Teenage Republicans, Best Buddies and the rifle club,” Smith said.

Even though he loves being a part of the school community, he dreams about traveling abroad. Smith hopes to eventually go to Italy and experience their immense architecture and language. While being there, finding his ideal pizza, covered by chicken on one side and the other side by sausage, would not be hard. While Rome is packed with pizzarias, Venice is the ideal location to embrace his passion for crew on the other side of the world.

Eventually, he would return home to pursue his passion on the court. Smith loves playing basketball and is the current point-guard of his basketball team, the Super Storms. He loves playing on a recreational team but he has bigger dreams for the upcoming year.

“This year I am trying out for varsity basketball and hope to make the team,” Smith said.

Due to his passion for basketball, one may expect that if Smith were able to switch lives for a day with someone he may pick a basketball legend such as LeBron James, but Smith has a more unconventional answer.

“I would want to switch lives with Donald Trump for a day so that I could be president,” Smith said.

As president, the first decision Smith would make is to bring his pug Daisy into the White House to join him and the first family. This act would make him stand out in history just as he hopes to do throughout his life. In fact, if he could be any color crayon he would be the bright orange one.

“As the orange crayon you can stand out on the paper next to all of the other dull crayons in the box,” Smith said.

He would like to stand out not only as a crayon on paper but also as a reporter and basketball player this year. The Sentry feels extremely lucky to have him on staff this year.

Nina Rutzen is a person who could live without the internet and wants to go to Kansas more than any other state. Rutzen, the newest President of Best Buddies, is a senior reporter in her third year writing for The Sentry. She is a strong believer in giving more rights to people with disabilities.

“I’m passionate about including people with disabilities and accepting people who are different from you,” Rutzen said.

Rutzen is the new the President of Best Buddies, a club that promotes the inclusion of people with intellectual developmental disabilities (IDD) through one-on-one friendships between students who have and do not have an IDD. Rutzen joined the club in her freshman year and has taken on a more prominent role each year. She also is the president of DARTT (Doing Art Together), an art program created for children with special needs.

While she will always fight for more respect for people with disabilities, Rutzen said there are also other issues in the country that she would like to solve. She said she would want to change the current president. Rutzen also wants to promote the acceptance of all religions in the United States.

While Rutzen is very passionate in these certain areas, she also would like to visit a few different places. Of all the states in the country she wants to visit, Kansas was her top choice.

“I met someone who lives there and it sounds like it’s really cool,” Rutzen said.

While living in Arlington is definitely more urban than most parts of The Sunflower State, Rutzen says she would rather live in a wilderness far away from civilization than on the city streets.

While she said she wasn’t tough enough for the city streets, Rutzen certainly is tough enough for her course load, along with writing for The Sentry, she is taking six Advanced Placement (AP) courses this year. School is obviously very important to Rutzen, who says her favorite subject is English.

All of Rutzen’s amazing qualities are going to be brought to a terrific college next fall. Despite saying earlier that she would rather live far away from civilization, Rutzen said she would prefer going to school in a city.

“I definitely would prefer a large urban school,” Rutzen said.

A person with all of these clubs, honors and inclusiveness makes Rutzen a great fit for our school. Being a tremendous leader and person, as well as a great student in the classroom, makes The Sentry lucky to have her on staff as a reporter.