Athlete of the Month: Tanner Wall 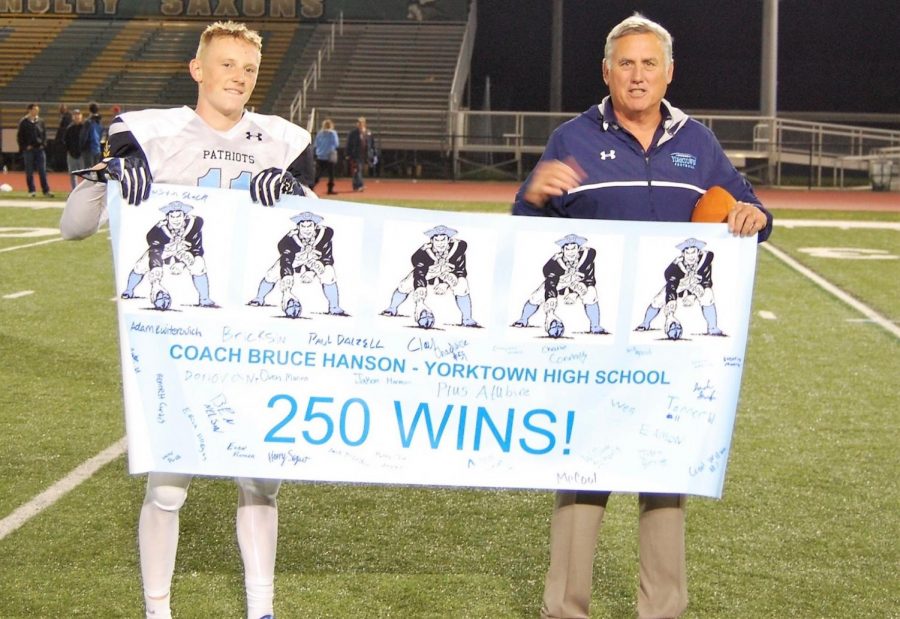 Senior and multi-sport athlete Tanner Wall has been enjoying a great beginning to the school year both in and out of classes. Wall is a talented baseball player, but it is his skills on the football field that have made his name a popular one around the county.  Wall and the Yorktown team have found success early in the season that has been missing during the previous two seasons.

Q: What has allowed the team to be so successful, getting off to a 5-1 start?

A: I think that the biggest difference this year is we have a closeness as a team that we didn’t have the last few seasons.  The seniors got together in the summer and chose a motto for this year which is ‘Band of Brothers.’  It comes from a Shakespeare line – ‘He who sheds his blood with me shall be my brother.’ We approach every practice and every game as a family, every  player has an important role in our success.

Q: What did you do in the offseason to improve your game?

A: In the offseason I worked with a wide receiver coach and a speed and agility coach.  Once baseball ended in the spring, I got in the weight room six days a week until August.  I was able to train and build my body to be more explosive and durable for the season.  I credit that work to why I am able to stay healthy during the season. I also travelled the country and attended 12 football camps at various universities.  I learned from some of the best coaches in the country and I learned something from every one of them.

Q: Looking ahead, how do you think the Yorktown football team will fare as we enter into the latter part of the season and into the playoffs?

A:I’m excited for the rest of this season.  We have three really good tests left on our schedule including a top ranked South Lakes and our rival, WL. Beating a 7-1 South Lakes [team] set us up for a possible home playoff game.  I think if we play our best football and continue to make big plays, we have a shot to beat anyone on any given Friday night.  Of course we look forward to playing our rival at their stadium.  I’m confident that my team will rise up in that game and make our school proud.

Q: When you step up to the line of scrimmage, where is your preferred positioning on the field?

A: It would be hard for me to choose a favorite position but I definitely love lining up at wide receiver.  Lining up on the outside and looking at the defense and understanding before the play what I have to do to get open and seeing the eyes of the players who I am going to beat on the play – that’s a rush.  I also love playing safety.  I think a lot of being successful at football comes before the ball is snapped.  It happens in the film room studying teams tendencies and formations.  So when we get to Friday night, we can see a formation and make educated guesses as to what the play could be.  Playing safety gives me the best look at the offense and often the freedom to get after the ball.

Q: What has been your favorite memory of the season so far?

A:I think my favorite moment so far this season has been after we beat Langley.  That was Coach Hanson’s 250th win and we surprised him with a big banner to celebrate.  I’ve never seen Coach Hanson with such a big smile on his face.  I promised Coach Hanson last summer that we would get him to 250 this year.  No one thought we would win six games this year so that was a special moment.

Q: Are you planning on playing in college?

A: I am still hoping to have the opportunity to play football in college.  For the last year I have been recruited by quite a few schools and in the end, I hope to choose a school that has both great academics and a great football culture.

Q: How do you think your former skills at quarterback have affected your play at the wide receiver spot?

Q: As wide receiver, what kind of relationship do you have with quarterbacks, Will Porter and Grant Wilson?

A: I love both those boys.  Both have unique strengths.  Both have the ability to make all the throws and I’m grateful that both trust me to run the right routes and give me the opportunity to make plays.  I spent a lot of time with both of them in the off season working on timing and comfort and they are the reason why I am having such a strong senior season.

Q: What is an upcoming game that you have been looking forward to and why?

A: I am really looking forward to the South Lakes game.  They are probably the best team we will play in the regular season.  They are highly favored to win our conference.  They are ranked in the top 20 in the DMV. They have a few very talented D1 players.  That will be a big test for us and it’s games like that that bring out the best in me and my teammates.  I’m also really looking forward to the WL game for all of the obvious reasons.  They stole one from us last year and the legacy that I want to leave my school is beating our rival and returning that pride back to where it belongs.

Q: How long have you been playing football, and what do you think it has taught you?

A: I started playing tackle football my freshman year here at Yorktown.  I have been a big football fan all my life and come from a fanatical football family.  I think that one of the most important things that football has taught me is that football doesn’t build character, it reveals it.  If you don’t do the work off the field.  If you don’t prepare your mind and your body to be successful off the field, you will never be fully successful on the field.  It has also taught me that football, like life is many different battles within a big war.  You lose a play or two here and there but every play is a new chance to win a battle.  And if you win enough battles than in the end you’ll often win the war.  Just like life.  We have challenges and struggles every day.  Just have to win more days than we lose.

Wall has been the centerpiece of the Yorktown football team and is a major reason for the team’s success. With 13 touchdowns, 1,250 all purpose yards, 82 tackles and two interceptions,  Wall has been productive on both sides of the ball and is looking at his best season yet as a Patriot.