Arlington Students Walk Out in Protest of Sexual Violence 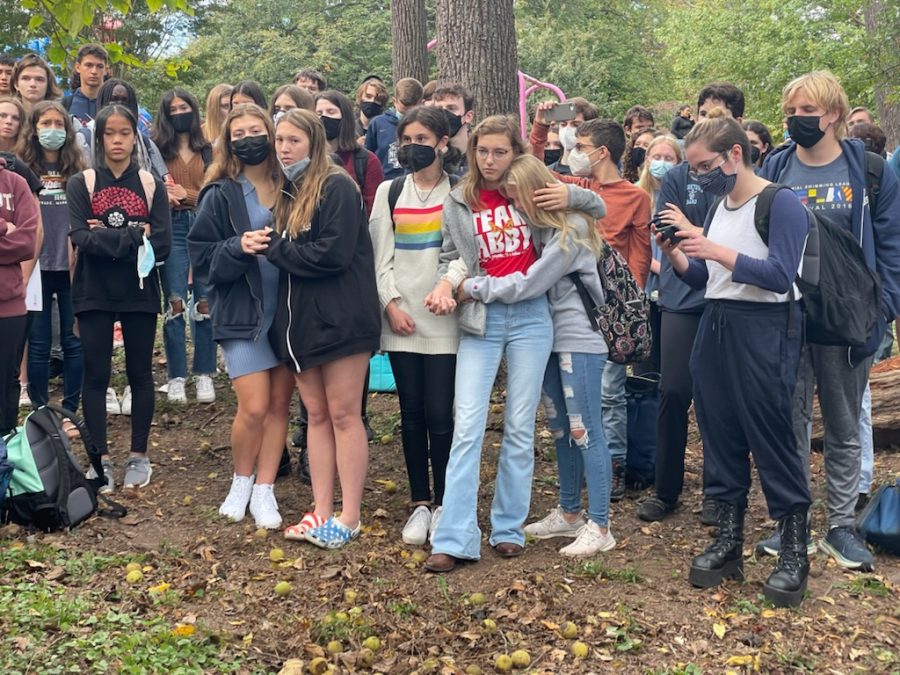 At 11:00 a.m. on October 22, hundreds of high school students across the county walked out of class to protest sexual harassment and assault in Arlington Public Schools (APS). The demonstration followed events at Yorktown’s Homecoming football game, where band and color guard students were physically and verbally harassed by student spectators.

The game was unusually crowded; students were crammed chest to chest on the bleachers and against the railings, pushing the student section to capacity. Despite this, there were few concerns about overcrowding at the game during the planning stages.

“We’ve always been able to accommodate crowds at our games, some of it through creativity in terms of where students are located, but I wouldn’t say there was any concern about the number of students. I will say that we have reassessed after each home game this year how best to situate the student performers in relation to the student body,” Yorktown Director of Student Activities Michael Krulfeld said.

There were seven staff members and at least one police officer at the game supervising the event, including three administrators located in and around the student section. The concentration of students, however, made security difficult.

“The energy seemed kind of tense. There were just a lot of people there. It felt like people were trying to have fun, but every time you turned you’d bump into someone. If you wanted to get out it would take you like 20 minutes.… Even with parents there [students] felt scared because they couldn’t leave if they wanted to,” freshman Jojo Sprinkel said.

The harassment began at halftime as performers walked onto the field in front of the seniors permitted to watch the show from the sidelines.

“It was particularly rowdy this game since it was the Homecoming game. I think a lot of students were intoxicated in one way or another, and they started with small harassing comments made at band kids. It started out with smaller things.… just general negativity, but it started to get more and more intense. One of the students told another student to kill themself,”  junior Zibby Lunger said.

As the comments intensified, they also became more sexual in nature, directed particularly towards the color guard.

The harassment escalated as the band took their seats following halftime. A performer found herself surrounded by the crowd and was inappropriately touched while trying to pass through the student section. An investigation into the incident is being conducted by the Arlington County Police.

Administrators were informed of the incident immediately following halftime. Word quickly spread among students and staff, and by the end of the following day, some version of the event was largely common knowledge.

“In my recent memory, there has not been a time at which on-field athletes have participated in any behavior that has reflected negatively on the school. Anything that has reflected poorly has been from the stands, including both adult and student spectators, not the coaches and players of Yorktown High School. In this particular case, football players were nowhere near the field at the time of the acts,” Krulfeld said.

Student outrage was defined not by disbelief but by disappointment, mainly in response to other students defending or minimizing the events at the football game.

“It’s really frustrating to me the amount of debate over whether or not this is a problem. [Students] are harassing 14-year-old girls at football games. What do you mean ‘is this a problem?’ This is a pattern of behavior that has not been addressed,” Lunger said.

“The issues at the game were brought up in the senior group chat, and there was a girl that said that we should do something about it. A bunch of people started spitballing ideas and at some point a walkout got brought up,” W-L senior Grace Gent said.

As the idea of a walkout gained traction in W-L, a graphic was circulated on social media with the date and time of the protest, as well as blank spaces for other schools to determine their destination. Though W-L students were the first to organize the event, the goals and content of each school’s walkout was left up to the interpretation of each student body.

“While sexual violence is a broad issue, it is very specific to each school at the same time. We wanted to be respectful of that and leave the decision of what to focus on to each school,” Gent said.

With the day of the walkout drawing closer, school administrations across APS released information regarding the county’s official position. The letters emphasized the importance of students’ right to protest, though the event was not county-sponsored.

Despite the unified message of support, student organizers at W-L encountered some resistance when clearing the protest with the school administration.

The final stance from the W-L administration was that students would be excused for protest given notice from their parents, allowing hundreds to participate.

The Yorktown walkout featured a speech given by Scotney Young, a domestic violence and sexual assault prevention specialist from Doorways Virginia, a nonprofit focused on addressing sexual violence in our community.

“I was contacted by a couple of students who had reached out to Project Peace, which is a large initiative at the Arlington Department of Health. The students were looking for someone to speak at the walkout, so Project Peace put them in contact with me,” Young said.

Students also detailed their own experiences with sexual harassment in APS.

“It was a very emotionally charged event. There was a lot that people had to say and I think that it was a success that people were able to share their stories. That was what made the walkout so powerful,” senior Avery Butler said.

Administrators observed from school grounds but did not engage with the proceedings.

Many speakers called for APS to do more to prevent and address instances of sexual violence in schools, citing what they saw as inaction on the part of the administration. Any disciplinary actions taken by APS against perpetrators of violence or harassment at the homecoming game are confidential.

“The students identified as the main perpetrators of harassment were addressed by administrators with appropriate school consequences, both short and long term. For the inappropriate touching, the school did an investigation and could not determine who the perpetrator was. We spoke with many members of the band and color guard and are currently in the process of having a conversation with those that were involved on both sides,” Krulfeld said.

As per Title IX, students can either request physical distance from their harassers in classrooms or be moved to a different class altogether.

Yorktown’s administration has also released a series of measures to be implemented at future home football games, including a limit on the number of students allowed in the stands and the indefinite suspension of on-field viewing privileges for seniors. When it comes to addressing sexual violence, though, students have other frustrations with the current system.

“The bigger issue is the lack of information about the reporting process [for sexual violence]. I’m a senior. I’ve been at [Washington-Liberty High School] for four years. Out of all the time APS has taken out of my day to talk to me about Naviance and career quizzes, not once have I been told how to report sexual harassment or assault to the schools,” Gent said.

This and other concerns stem largely from what is seen as a culture of acceptance of sexual violence in APS.

“The Virginia Department of Health did a survey of Arlington schools a couple of years ago, and 1 in 18 male students and 1 in 7 female students reported some type of sexual violence on campus, and we know those numbers are underreported,” Young said.

Many students cite education and accountability as the building blocks of a safer school climate.

“I think to a certain extent the administration can’t do that much aside from actively trying to change the culture around sexual harassment and assault. You have to let people know that they won’t be accepted if they do these things, they’re not going to be cool, and people are not going to want to be around them,” Gent said.

One aspect of the protest that students see as an unmitigated success was the opening of communication lines between students.

“I think it would really help solve the problem to have an open and honest conversation with some kind of mediator … connecting people through their vulnerabilities instead of through their differences. If people are more empathetic — and maybe the administration could create lessons around that — it would lead to people having a better understanding of the other students at Yorktown,” Butler said.

Administrators also point to more open dialogue with students as an essential part of creating change.

“The most beautiful thing to me when I talk to students is when there’s a problem and they share with me recommendations and solutions.… It’s important to make sure that students’ voices are heard, whether it’s writing emails, speaking up in a meeting, or calling a gathering for all of us to sit down, I’m happy to do that anytime. I think when there are really contentious issues like this the problem is that people don’t listen. If we really listened to each other we would understand each other and try to find solutions, so we should create those spaces where we can really listen,” Durán said.